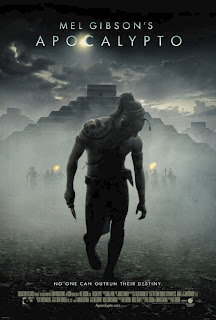 I saw two movies yesterday: Apocalypto and Dreamgirls. The first was great. The second, not so much.

Both were really polished in terms of cinematic craft. Production values were top notch, and the performances were solid. What made one a great movie, and the other a dud? The first director made good storytelling choices, and the other did not.

The more I learn about storytelling, the more I'm realizing that it all comes down to the choices you make about what to include and exclude in your story. Pete Sohn, a fellow story artist at Pixar, and probably the best oral storyteller I've ever met in my life, always talks about 'details' in a film or a story. You'll always hear him saying "Dude, that detail is so real!". When I first heard him talk about it, I wasn't quite sure why he got so fixated on such small... well... details. What about structure? What about conflict? What about themes? But after watching these two movies yesterday, I think I'm starting to understand what Pete is getting at.

Structurally, Dreamgirls is pretty solid. It's a typical rags to riches story and it hits all the right notes in more or less the right places. So why the heck did it fall so flat? I'm not positive, but I think it might have something to do with those 'details' that Pete is always talking about. Not so much the details of the set, or the costumes (though they are very important as well), but the narrative and emotional 'details' of the story the director chooses to include or exclude in the film. Details can go a long way in film. Sometimes all you need is a glance, a gesture, or an insert shot of something to clarify to the audience where they should be emotionally or what is happening narratively. It's really about information transfer: 'How' and 'What'. 'What do I need to tell the audience to get them to follow me to the next story point or to the next emotional point of this character's arc? And then 'How do I tell the audience this piece of information'. When the answer to the "How" question is very small and very subtle, it becomes a 'detail'.

So the question then becomes 'Why are small and subtle ways of communicating information preferred to loud and overt ways?" I think it has something to do with efficiency. Brad and Mark are always pushing for efficient storytelling. I think all the directors at Pixar are. And a detail, when used correctly, is one of the most efficient ways of telling a story.

In Dreamgirls, so many of these details were missing. Scenes would just happen without any build up or lead in. For many of the scenes, I often felt like I had just walked into a room during the middle of an argument between two people. I could kind of catch the gist of what it was they were fighting about, but I wasn't sure how they got there, or what the deeper issue really was. It's like the director didn't give me room to build up enough speed to get over the emotional hurdles he was putting in front of me. And because I wasn't able to follow them emotionally, and sometimes even narratively, I just kept getting pulled out of the movie. My disbelief kept getting unsuspended.

But with Apocalypto, I couldn't help but be swept up by the story. There was an authenticity and believability, both emotionally and narratively, that kept me in this make believe world. I couldn't keep my eyes off the screen, and my mind out of the narrative. My disbelief was suspended from beginning to end, and I think it was those small details that kept me there - that helped me make it over those hurdles.

If you haven't seen Apocalypto yet, go check it out while it's still in the theaters. The sights and sounds of the film are spectacular and deserve to be seen on the big screen.
Posted by Alex Woo at 12:30 PM 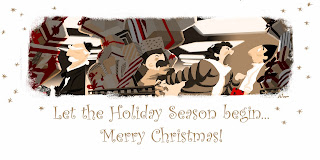 This is a card I made for my friend Jason. 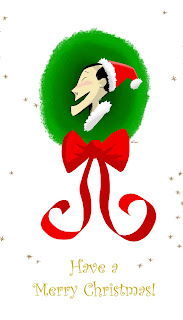 Did a bit of work on the comic today. Not much, but at least it's progress. I warmed up with some people sketches...here's one that came out ok. 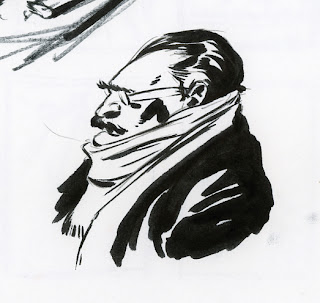 Been playing around with an inking pen my friend Bill lent me. I'm trying to figure out what this comic is going to end up looking like... Here are a few tests... not that happy with any of them... will need to keep plugging away to figure it out. 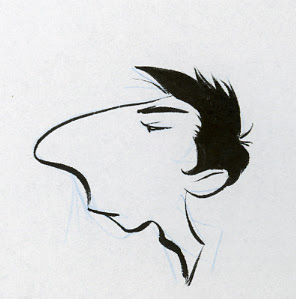 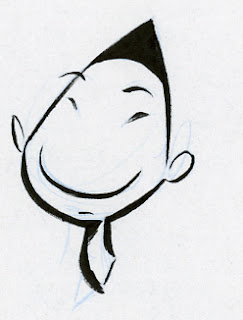 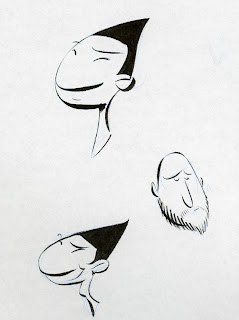 I wanted to spend the evening finishing the thumbnails to my afterworks story, but I got carried away with some girly sketches. Ugh! I wish I was more creatively disciplined... 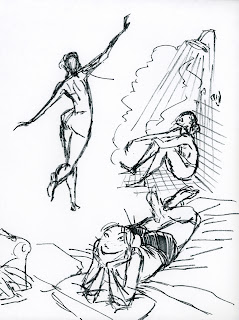 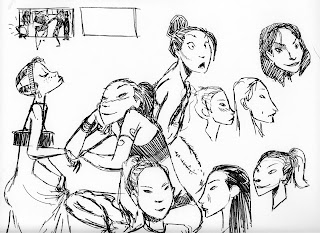 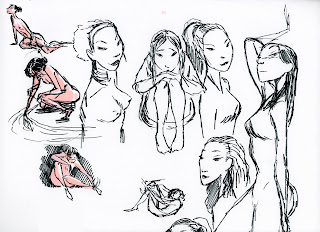 Sorry it's been a while...been lazy and busy...but mostly lazy. I think I'm going to start posting some of the weekly sketches I do from Tom Gately's gesture drawing class. Most of them are hardly ever worth looking at, but every now and then, a nice one comes out. I'll try to post those. Here's a few from my mornings on the BART. 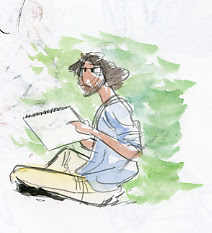 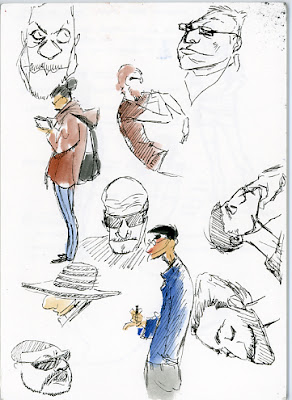 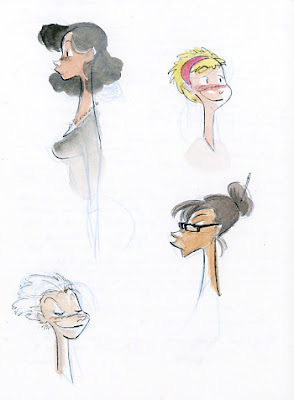 So I'm hoping to be a part of Afterworks 3 (the third collection of short stories put together by Pixar Artists). I'm not sure what the title is going to be yet, but it's going to be about a real life experience I had a couple years ago at the San Diego Comic Con. I'm not sure I'll be able to finish it in time, but I'm definitely going to try. I'll post my progress on this blog, and hopefully I won't give too many spoilers away. I've never done a comic before, so bear with me. Hopefully you can learn from the many mistakes I will probably end up making. For now, here are a few of the players in the story: 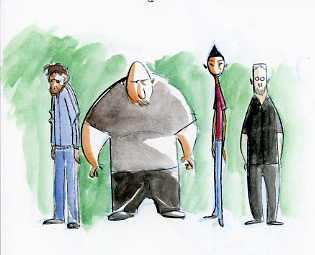 I did these sketches at the Narita Airport in Japan. These were the only decent ones that I did. I just love the faces on old people... 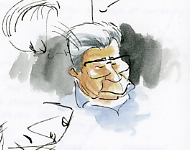 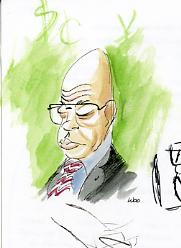 So this will hopefully be the first of many regular posts to come... I've been trying to avoid the blog bug for a while now, but I can't fight it anymore.

So with that said, here's a couple pages from the sketchbook... 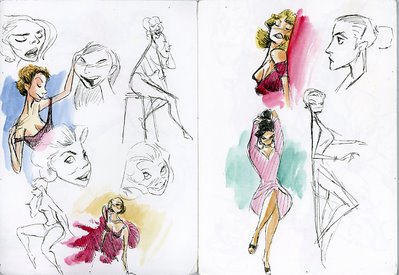