Sorry it's been a while. I've been sick, and swamped with work. Haven't been drawing that much, but i have been doing some writing. I'm applying for this grant from my alma-mater, and as part of the application I had to write an essay about my work. Here it is:


Growing up, my mother always said, "if you do what you love, then you'll be good at what you do." Of course, everything she said went in one ear and out the other. But when it came time for me to choose a university to attend and what degree to pursue, I somehow recalled those words of wisdom she so lovingly gave me. "I love movies, Mom, so I'm going to go to film school."

Now, as first generation immigrants from Hong Kong, both from relatively modest backgrounds, my parents were not too keen on the idea of paying tuition for their first born to study movies. Film school was not their idea of higher education, nor did a future career in filmmaking seem like a legitimate profession. But, I loved movies. And, I wanted to make them. And, well, according to my mother, that meant that I was going to be darn good at it.

So, with bright eyes and an eager spirit, I enrolled into NYU's Film & TV production program. My parents were supportive (meaning they paid for my tuition), but they were eager to remind me that it was never too late to change majors.

During my first day at Sight and Sound Film, we were asked to introduce ourselves and to name our number one all time favorite film. "What a great ice breaker," I thought, "and how appropriate. I wonder how many people like the same movies I like." The first student gave his name and said that his number one all-time favorite film was Federico Fellini's 81/2. He said that the film struck a chord deep in his soul, and that it single handedly inspired him to become a filmmaker. The other students nodded in agreement over the films' brilliance. The second student mentioned a film by Jean Luc Godard and again, everyone acknowledged his refined taste in cinema. As we continued around the classroom, people continued to name films and directors that I had never even heard of --Films from the French New Wave, German Expressionism, and the Italian Neo-Realism movements. Everyone seemed so intelligent, their taste so sophisticated and their intentions so serious. What were they going to think when I told them that Back to the Future was my all-time favorite film? Was this some kind of mistake? Did the admissions officer accidentally let a popcorn-munching, brain-dead movie junkie into this refined and sophisticated institution?

I spent the rest of the semester frantically trying to catch up with the high culture of cinema that I was so clearly ignorant of. I watched all the films my peers talked so intelligently about, read all the books that documented the different movements throughout films' history. I even tried to dress like a filmmaker. I bought turtle necks, a plaid sport jacket, and even started sporting a pair of black rim blue-tinted glasses (despite the fact that I had perfect 20/20 vision). If I were capable of growing a beard, I most definitely would have.

Needless to say, my antics were not very effective in transforming me into a 'serious filmmaker'. My creative efforts were sorely misdirected, and the results were not surprising. All I had to show for at the end of the semester was a handful of terribly pretentious short films, and an even more atrocious wardrobe.

In New York City, and particularly in the film community, there seemed to be a sort of unspoken expectation for filmmakers to break new ground, to push the envelope, and to make films with earth-shattering ideas. This tyranny of potential was crushing and, for me, creatively stifling. I spent most of my time trying to dance to someone else's beat, and I ended up falling flat on my face.

I started to think that I had made a serious mistake in choosing to go to film school. "I think I should change majors. I just don't feel like I belong here," I lamented to my mother. "I thought you loved movies," she said. "I do! But not these kinds of movies. Give me Speilberg, Zemeckis and Bird, not Lynch, Truffaut, or von Trier! I want to make movie equivalents of Rockwell's, not Picasso's." "Well, then do it".

I threw away my glasses, my turtlenecks and the silly notion that I had to be a 'serious filmmaker'. I took refuge in the animation department, where entertainment was not only accepted, but cherished. Under the tutelage of John Canemaker and the other animation professors, I found a place where my creativity could run amuck. I rediscovered my love for the medium of film, and threw myself head first into production on an ambitious ten minute animated action-adventure that was perhaps the most unserious film imaginable, Rex Steele: Nazi Smasher.

Three long, but rewarding years of production later, I found myself on stage at the Student Academy Awards, accepting the trophy for first place in the animation category. A year after that, I found myself at Skywalker Ranch in front of George Lucas, pitching him the story for an animated feature that LucasFilm Animation had optioned from me, based on the strength of the short. And the year after that, I found myself at Pixar, next to Brad Bird (my number one all-time favorite director) telling me that my film was "way cool", while I was pitching him a sequence I storyboarded for his next film Ratatouille.

Since the films completion, Rex Steele: Nazi Smasher has won 17 awards, garnered 21 nominations, and played at over 40 film festivals around the world. The DVD has sold nearly 4000 units (700 of which sold within the first five days of release) and will soon be published in France in conjunction with the Rex Steele: Nazi Smasher graphic novel as part of a two-piece collector’s set.

There are three valuable lessons that I've learned about my work and my own creative process from these experiences. The first is that for creativity to thrive, I need to be in an environment where I can work uncensored - where mistakes are considered an integral part of the creative process. The second is that (while it may come off trite) I need to stay true to myself - that trying to be someone else is a surefire recipe for failure. And the third, and most important lesson I've learned is, of course, that I should listen to my mother.
Posted by Alex Woo at 12:17 AM 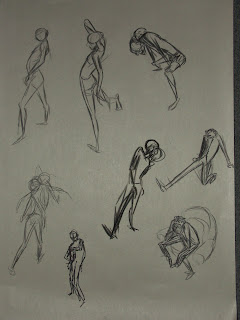 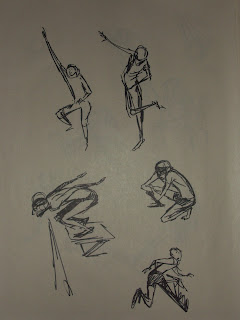 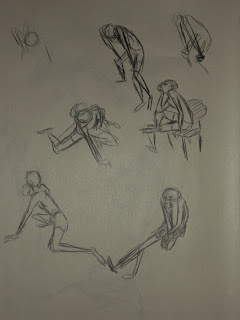 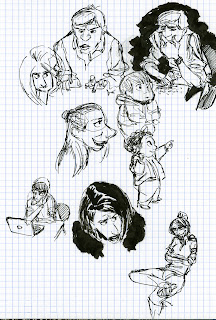 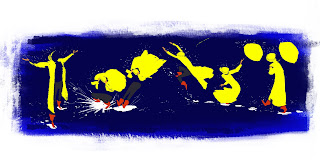 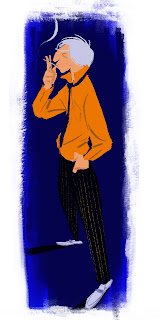 Here's a couple sketches I did today at a nearby cafe. 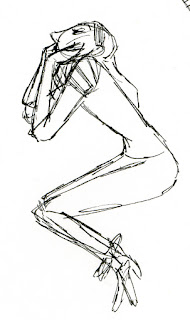 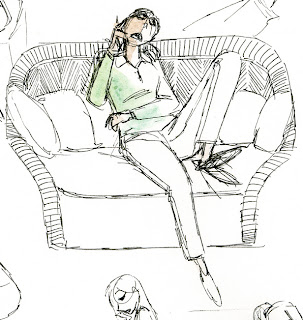 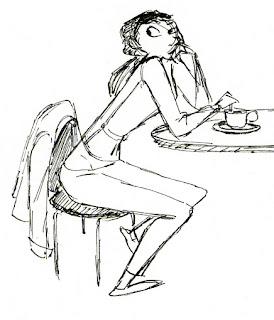 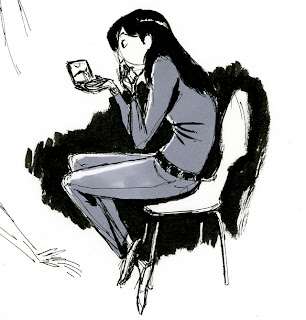